Handel’s Messiah and the Baroque Violin 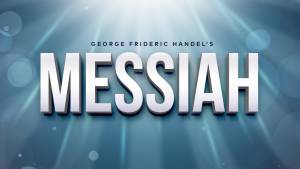 Long Beach Camerata Singers will perform Handel’s Messiah on December 21 and 22, 2019, with Musica Angelica Baroque Orchestra.  There are many reasons to attend what promises to be a beautiful performance; today we will focus on the use of the Baroque violin and why that is important and interesting.

Handel composed his famous oratorio in 1742, and it has been performed every year since then.  The music was composed to utilize the abilities of the instruments that were available at that time.  However, instruments changed as the decades and centuries passed.

Baroque Violin:  The size of the Baroque instrument is almost identical to the modern instrument, but there are other differences that affect the sound.  For example, the neck is angled back on modern instruments, which allows the strings to be tuned to a higher tension. 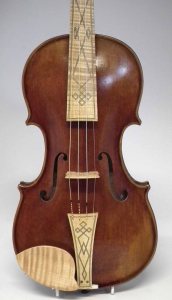 Also, modern strings are made of steel rather than gut, which produces a sharper sound.  The bass bar (a support on the underside of the instrument) on the modern instrument is larger and allows for greater volume.  However, the baroque instrument is actually more resonant simply because the box is under less tension and vibrates longer after the bow ceases to move.

Baroque Bow:  Another major difference is the evolution of the bow. Baroque bows generally look straight or bent slightly outwards in the middle, with an elegant “swan-bill” pointed head. 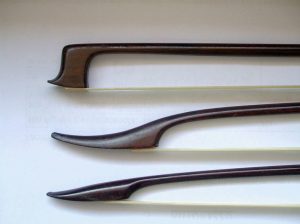 They are typically made from strong, heavy snakewood. By contrast, a modern bow is made from pernambuco and has a marked inwards bend, particularly when the hair is relaxed, and has a “hatchet” head at right-angles to the stick.

Baroque Bowing: In the Baroque period, musical phrases were made up of strong and weak notes, falling on strong and weak beats within a bar. When a violinist would move the bow in a downward stroke across a string, the sound was stronger than when the bow would be moved in an upward direction. But eventually the lengths of musical phrases grew, and more notes were meant to be played in a connected way, leading much further down the line to a phrase’s focal point. Accordingly, the bows for stringed instruments were then made to create the same amount of sound whether the bow was moving up or down.